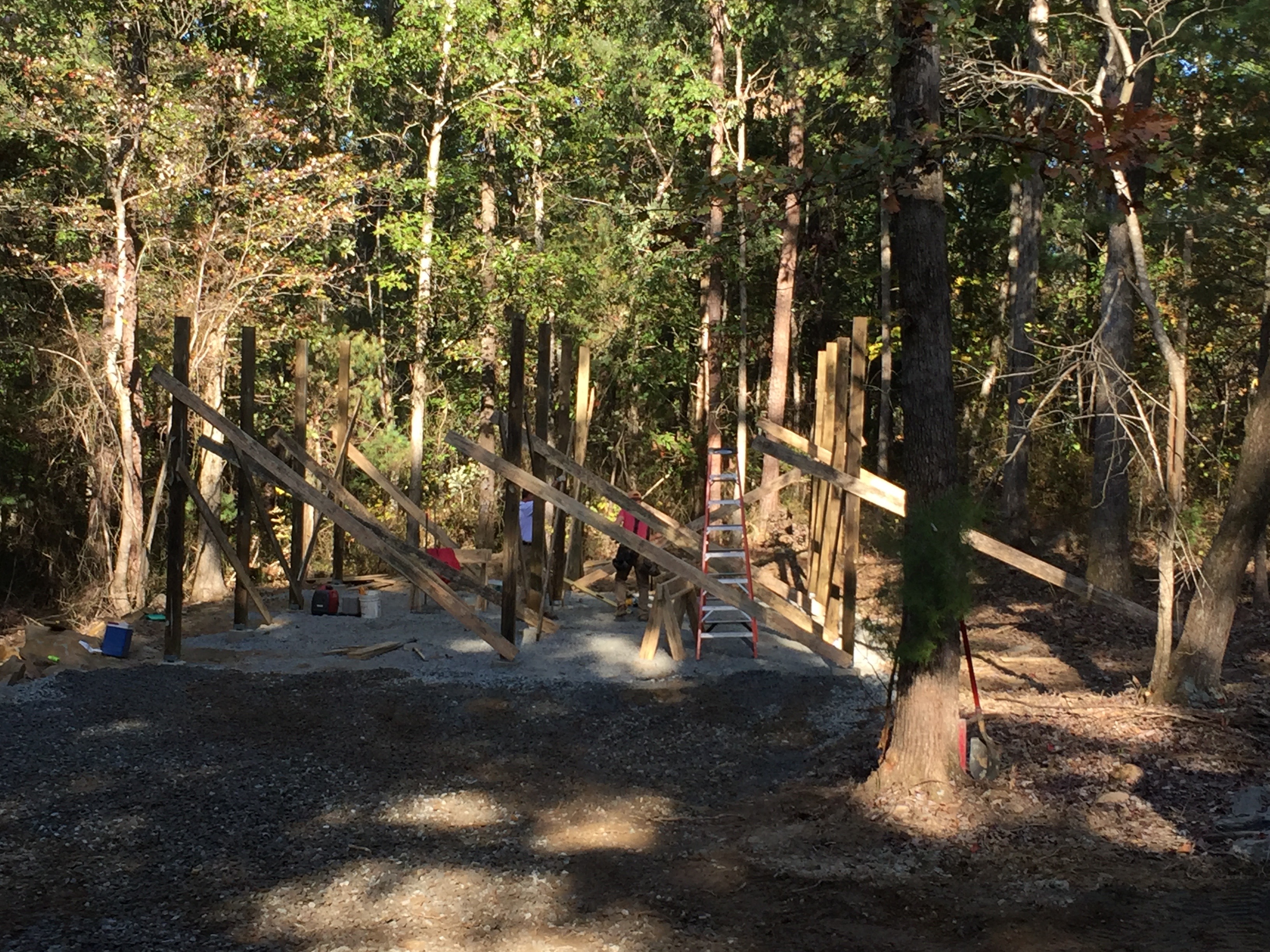 Bridge and Pole Barns Forming Up

The first half of October has been lovely, once it dried out, but by now it is clear that fall in falling. Leaves are turning, days are getting shorter, and the temperature this morning was in the low 30s. No news there, perhaps, but it is a clear indication that the end of the construction season is fast approaching and there is much yet to be accomplished. Starts have been made on bridges, pole barns, and parking spaces. The introductory photo shows the start of one of the two pole barns that Forrest is erecting to house our backhoe and dump truck now that the Quonset hut will no longer be available for the purpose. Here’s a panorama of the site in its early phase:

Devin and Rachel (and helpers) have planted thousands of plugs in the meadow below the viewing platform, with thousands more yet to come, but they are too small to register photographically at this stage, so you’ll have to take my word for it.

Charles and Dean are setting up bridge number 2 (being done first because it is over dry land instead of water), as seen here: 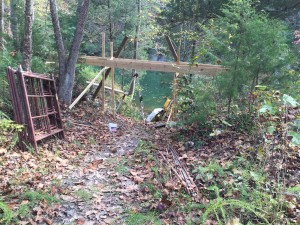 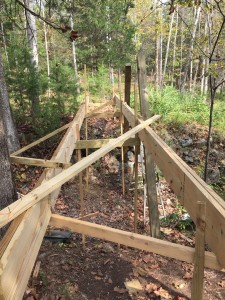 Where the deck will go.

(At least once in WordPress I was able to get two pictures side by side, but now the method eludes me.)

This looks like a regression, but actually it is Paul digging out in front of the viewing platform for a rain garden to be installed. 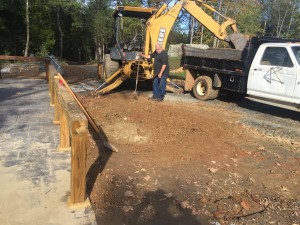 During the week, we entertained visitors from the Alberene Stone Company, who took some nice pictures and put them up on their Facebook page. Take a look 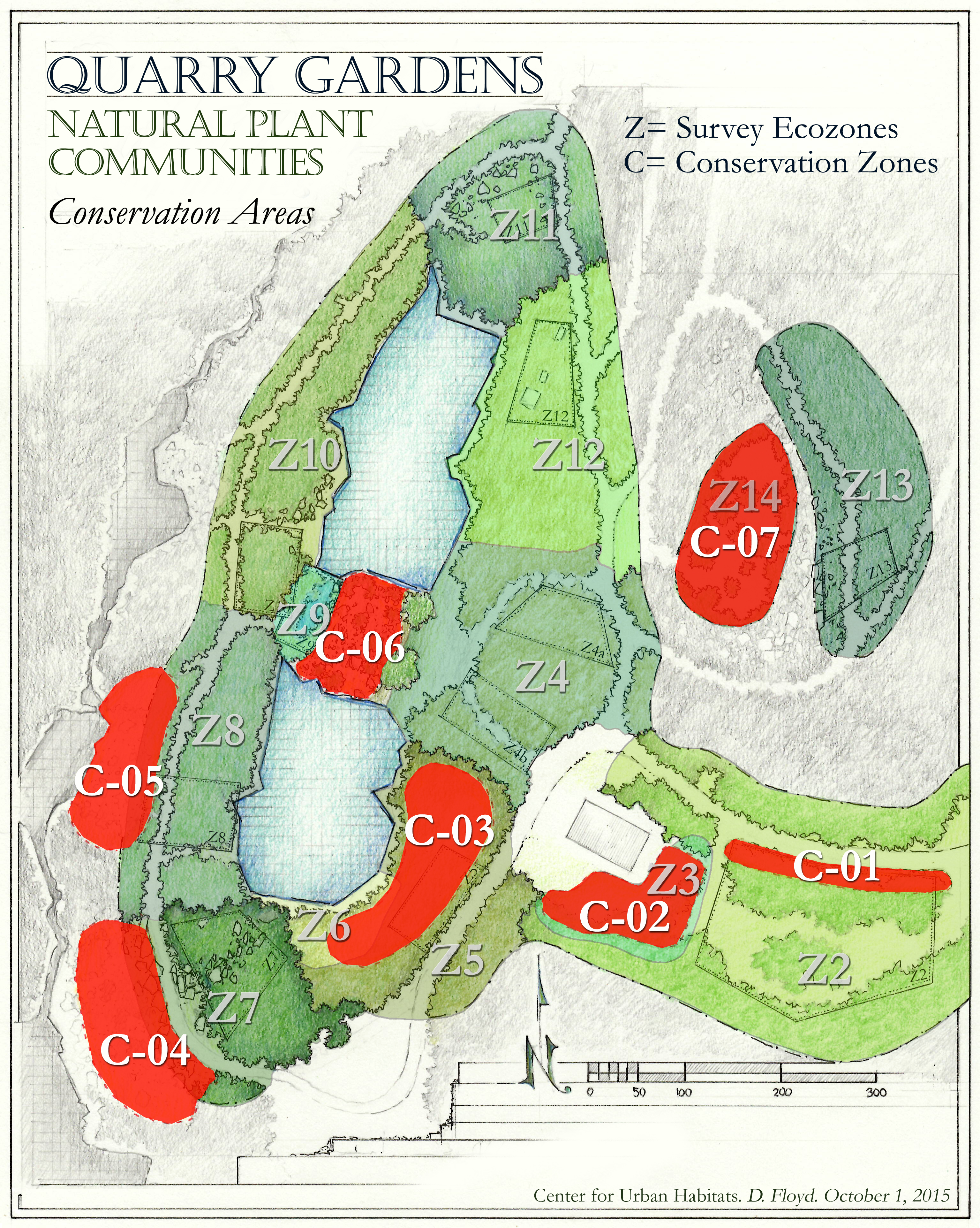 October 12, 2015. Devin and the Center for Urban Habitats have completed their report of discoveries at the quarries.

In 107 pages, the report includes notes on geology and descriptions of 14 ecozones and 7 conservation zones, along with lists and counts of plants, insects, birds, and animals. The map here shows the placement of natural plant communities around the two quarry pools and the visitor area to be developed. (Here’s the map again, a little larger.) 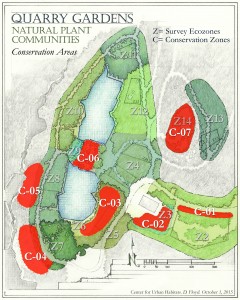 The survey has been ongoing since late spring. Its findings and recommendations have been informing our work right along, as trail routes were decided and the endless task of rooting out invasives begun. But it’s good to have it in hand–the natural foundation on which we will continue to build.

In the spring, we will want to complete the “as found” story with an inventory of early ephemerals missed this year. In the meantime, design of the gardens to be integrated into these zones continues. And planting is underway.

Happy that the heavy rains associated with last week’s tropical storm-hurricane Joachim scenario failed to dislodge the first of seven thousand or so plugs installed only days before to start a meadow in the disturbed area below the overlook platform, in what we now know as “Ecozone Zone 6: South Bryophyte Flat.”

We have had ten days of wet weather that have impeded progress on all fronts, and now new downpours are expected. In between the showers and over the sodden earth, construction has begun on one of the bridges, on the machinery storage barns, on planting the flat below the overlook (7,800 plugs expected), improvements to the parking area, and development of the path from the parking area to the administration building. In the event that things dry out and skies clear, I’ll have some pictures of all this. In the meanwhile, try to stay dry.