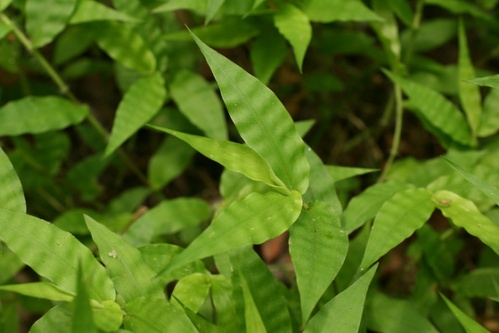 We have wavyleaf basketgrass! Fortunately, the picture is a stock photo, but Tom Dierauf pointed out some of our own when he visited in September. I didn’t get the import until he passed the word to Ruth Douglas, who let Devin Floyd know—we’re the beneficiaries of a network of experts—who filled us in on just how nasty the stuff is.

Wavyleaf basketgrass was first discovered in Maryland in 1996 in Patapsco Valley State Park, near Baltimore MD. It has since spread through Maryland and Virginia, showing many of the qualities of a successful and damaging invasive species. In some areas this shade-tolerant grass completely carpets the forest floor, leaving little room for native species. Its perennial life style enables it to emerge, year after year, through thick leaf litter; allowing it to colonize vast areas of forest inaccessible to annual invasive grasses like stiltgrass. Its insidious dispersal method of offering dozens of goo-covered seeds atop a spikey inflorescence ensures it hitches a ride on nearly anything mobile that brushes past: people, dogs and deer, definitely; small mammals and birds, probably. Also, nothing appears to eat it. Imagine the ecological consequences of large swaths of forest monopolized by an inedible understory.

Tom recalls seeing only a little of it near the entry road, in a small patch of Japanese stilt grass (another unwelcome guest, less invasive) It’s likely dormant now, but we’ll be on the lookout come spring.

Devin, Rachel, and Ryan have planted three red cedars and two native fringe trees near the Quonset hut/future visitor center; also about 20 smaller short leaf pines among the Virginia pines along the path to the overlook and around the flat. They have collected seeds of showy skullcap, white thoroughwort, muhly grass, and sweet-scented goldenrod, among others, to propagate. The plan is to bring back these very local genotypes for transplanting in colonies next spring.

Hoping to get our 10,000 or so newly-planted meadow and wetland plants (mostly plugs) through the winter unscathed, I’ve treated them with the most reliable, long-lasting deer repellent I know: Plantskyd—ghastly stuff.

Armand has been spending his time removing what seems like (and actually may be) miles of greenbrier vine (invasive native), moving rocks around to outline the paths and parking spaces in the parking lot, uprooting hundreds more miscanthus (invasive alien) plants with a pickaxe, and chainsawing various deadwood around the paths. We’ll save for next time pictures of the completed #2 bridge, the completed tumble-stair, several completed smaller rock stairs, the completed #1 pole barn, and the almost completed parking lot.

We had a visit from Eric Bull, a woodworker from the Scottsville area who specializes in “equestrian furniture” (jumps and such), but also has major woodworking equipment and a willingness to build rustic benches for us. His suggestion is to make each of the benches from a different species of tree local to our area (we have 46 catalogued around the quarries) and locate each near a representative tree from which it was made. Great idea, right? 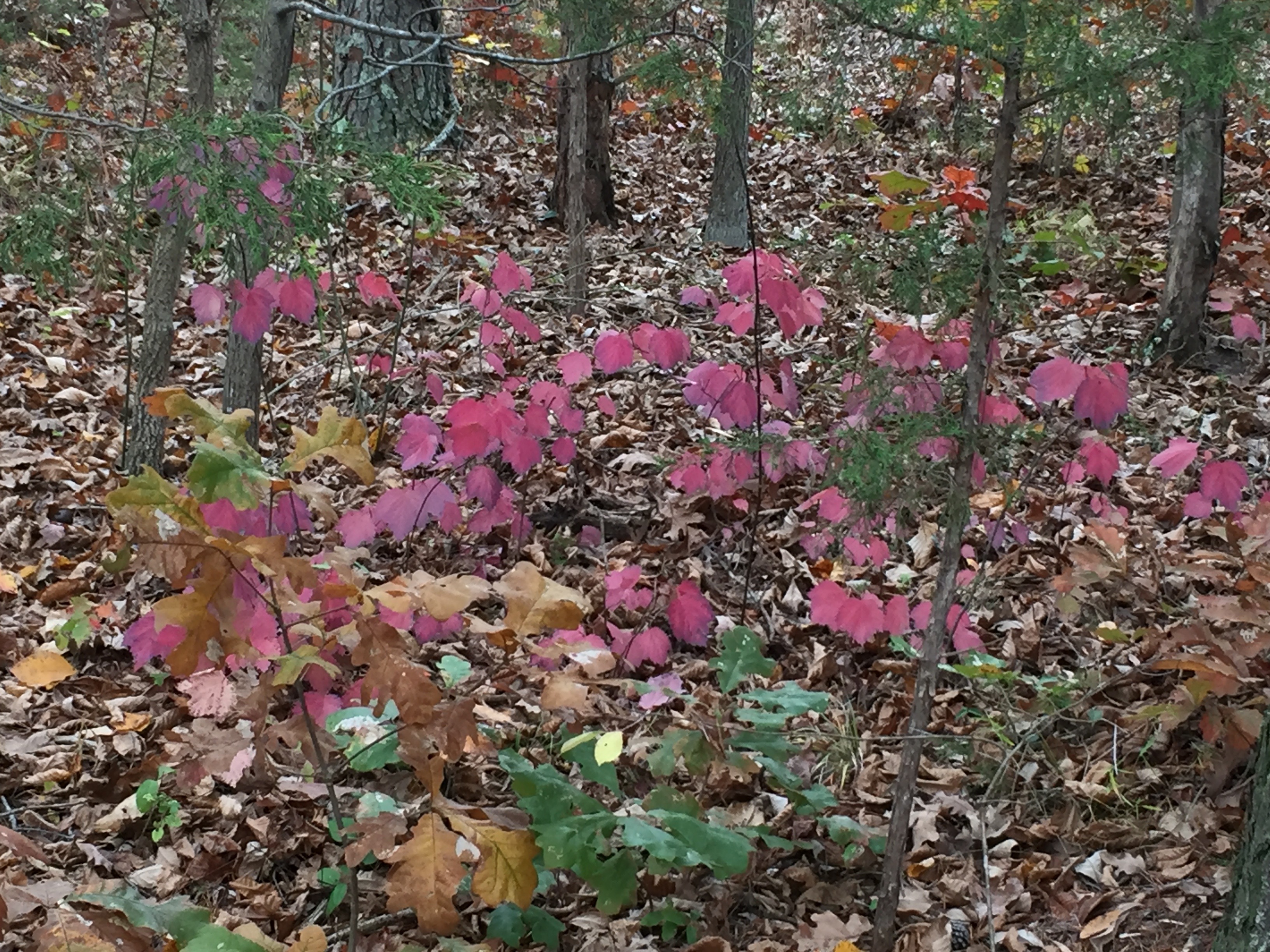 Fall colors this year have been particularly vibrant, as evidenced by the lovely rose shade on this cluster of Maple-Leaf Viburnums by the quarry trail. As fall has advanced, our project has also—with a lot of work being done in several different areas: construction of the pole barns continues, and the main barn is roofed and ready for siding; individual spaces in the parking lots have been designated and provided with car bumpers and rock outlines; plans are being laid for sanitation facilities at the Quonset hut and for a cistern system, and dozens of dead cedars and Virginia pines have been removed from the South Quarry Overlook. None of these are very photogenic at the moment, so I’ll leave them for later. Cataloging of our native species is being enhanced by hundreds of detailed photographs, but that, too will be for a later inclusion. Other fall advances have been more visible. First, stone work for the “tumble-stair,” the rock staircase below the South Quarry Overlook that we hope will somehow look as though it fell into place among the rock tailings, is becoming more definitive, although still not finished: 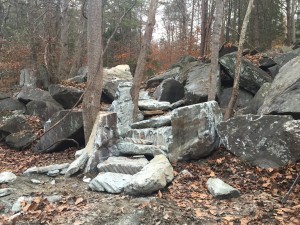 Several representatives of area garden clubs and native plant groups “cased” the project to see if they would be interested in having field trips, later. (They seemed to indicate they might.) With apologies to the gentleman whose face I managed to obscure in the photo, here they are standing on the almost-finished Bridge #2 (the first built, but designated as #2 on the plans): 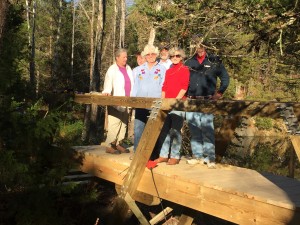 A new addition has been the creation of a “swale garden,” according to our naturalist, Devin, not a “rain garden” since it is intended to remain moist. It is only partially planted at this time, of course, and will look different once the plantings mature: 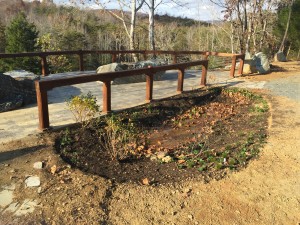