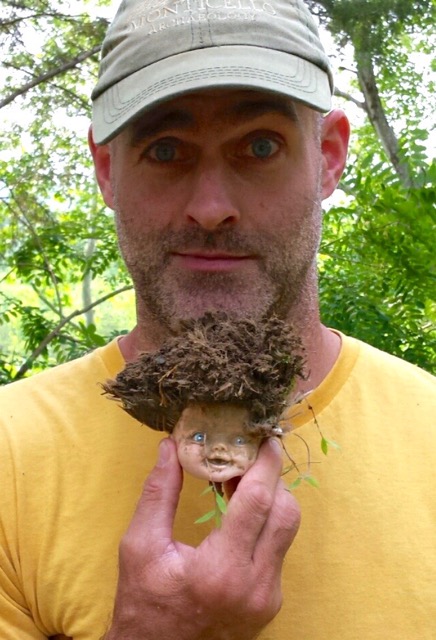 Yesterday, while preparing areas for planting, the CUH team found a quartz projectile point that Devin, (who is also an archaeologist)  identified as Middle Archaic (c. 5100-4500 BCE). The property’s former owner, during the late 1980s found many such objects, and even a soapstone bowl said to be from the same era. Many ancient artifacts were likely exposed in 1969, when Hurricane Camille’s world-record rainfall washed  the site’s topsoil into streams. 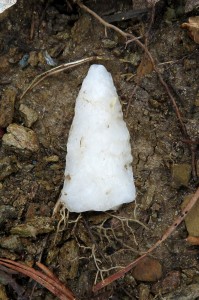 For about twenty years, until the mid 80s, these abandoned quarries were used by the Schuyler community as a dump. Over the past 25 years, we have removed hundreds of tons of appliances, bedsprings, plastic containers, shoes, and the like—and much remains on the upper east side, just under the surface. While surveying biota last summer, Devin found the featured doll’s head, above, wearing a moss wig.
Above the north quarry, some of the residual trash remains on areas that are too steep to clean up without elaborate safety gear and acrobatic cleaners, but once the spring greenery develops, much of it will disappear, and the rest will serve to illustrate our trash-mountain story (until we get it cleaned up). 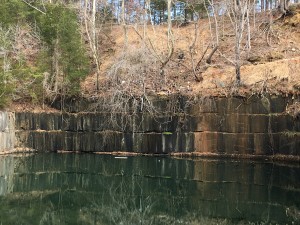 Other detritus: On the west side of the north quarry, a sardine can projects from a tree trunk. As public dumping did not occur on this side of the quarries, it is likely a remnant of a quarryman’s lunch that rested against the tree until it grew into place and soil washed away under it. A tree also grew around this old barrel, located between the quarries. 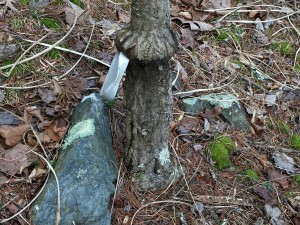 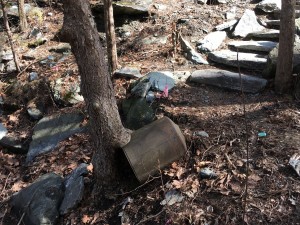 Along the trail down the steep, rocky south quarry slope are remains of a cable strung on iron posts that we surmise may have been installed for safer passage . We’ve smoothed the way so that it’s no longer needed, but plan to restore it as an artifact. A little farther along, a trough-shaped wooden box of unknown purpose rests atop one of the big rocks. 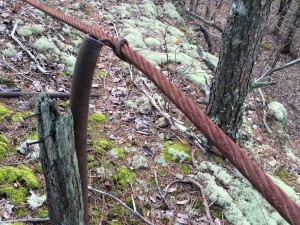 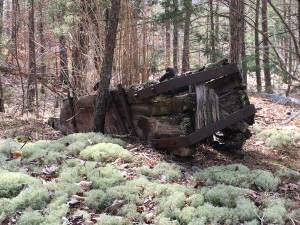 In other news, spring is just beginning to pop, and here is one of our early, little natives to prove it. (2x view) 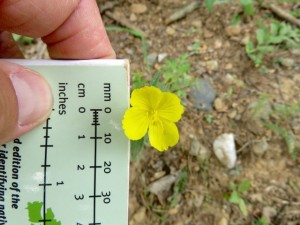 And the planting crew is busily preparing beds according to the established plans, or taking launch break at one of the overlook sitting rocks. 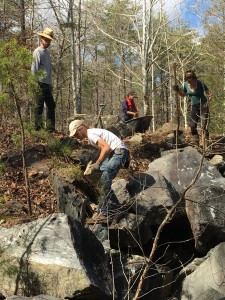 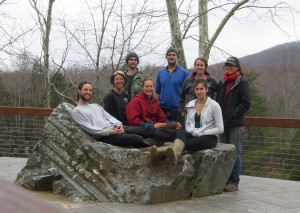 Progress is also happening on the redevelopment of the Quonset building, but I’ll save the visuals for the next post.