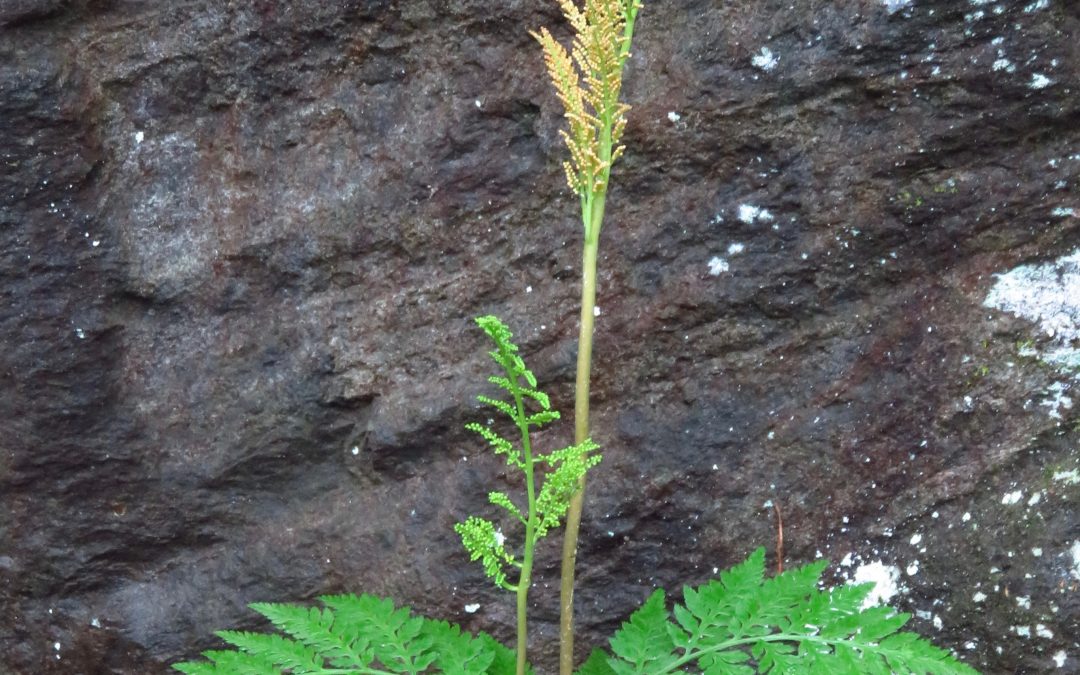 We haven’t seen a rattlesnake of the reptilian kind here at the Quarry Gardens site in 20 years. (…unfortunately—since their presence indicates a healthy forest environment). We do have other forms of rattlesnakes, however—three plants whose common names associate them with rattlesnakes. Among them is the Rattlesnake fern, depicted in the featured photo.

Rattlesnake fern, Botrychium virginianum, is a charming small fern, so named perhaps because the fertile spike is said to resemble the tail of a rattlesnake. Such resemblance may have led Cherokee and Chippewa peoples to use the plant as a topical treatment for snakebite (treat likes with likes). Each plant consists of a single sterile leaf directly attached (no stem) to an erect basel stalk; the roots are shallow, fibrous and fleshy. These unusual features tell us that rattlesnake ferns arose early on the planet, before the fern world evolved to arrange spore-producing sporangia as neat little fruit-dots or sori on frond undersurfaces, or to have the hairy, efficiently absorbent roots typical of modern ferns.

Another of our rattlesnakes is Downy rattlesnake plantain, Goodyera pubescens (not named for young tires), blooming now along the streamside trail, where it may be found at any time. One of the eastern U. S.’s most common native orchids, it was the Virginia Native Plant Society’s Wildflower of the Year 2016—http://vnps.org/wildflowers-of-the-year/wildflower-of-the-year-goodyera-pubescens-downy-rattlesnake-plantain/. Its bloom stalk rises in summer from a whorl of evergreen, ground-hugging, dark green leaves with a delicate pattern of light veins. Native Americans used the plant to treat snakebite and other conditions. Here is a composite of it and its flower. 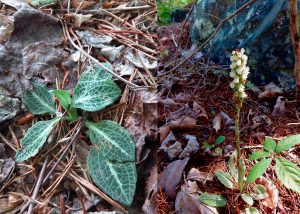 Yet another is Rattlesnake weed, Hieracium venosum, in the aster family. It sends up yellow ray dandelion-like flowers in May on slender leafless stalks. Its ground-hugging  basel leaves are marked by a network of purple veins. It is said to grow in high, dry woodlands preferred by rattlesnakes. We see it here on the thin soil above the South Quarry’s south wall, where little else but reindeer lichen thrives. It also has been used to treat snakebites. Although there is no reliable information about its effectiveness against poison (nor of the other two), the plant is rare enough that one is cautioned not to harvest it in any event. 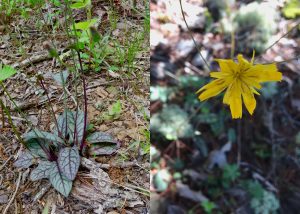