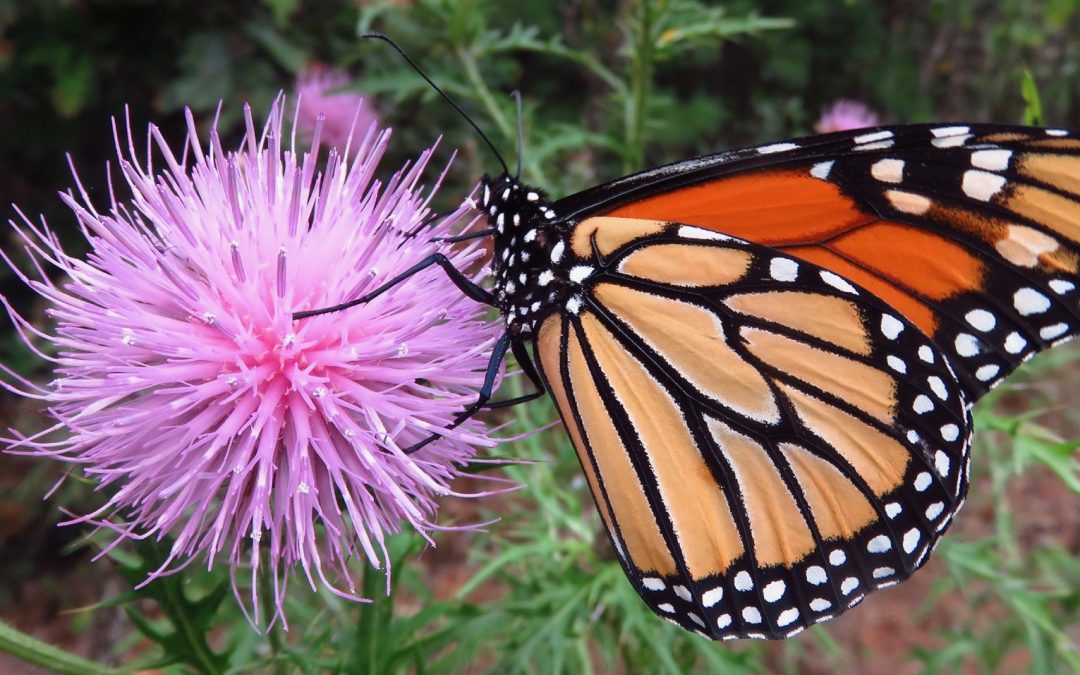 Monarch on a thistle—how beautiful! We’ve heard that the biggest threat to Monarch butterflies is loss of habitat where they overwinter in Mexico. And we’ve heard that feeding on milkweed renders Monarchs toxic to predators (which they signal with bright yellow and black stripes). In Bernice’s story, below, this week we learned Monarchs are not as safe from predators as we’d thought.

Kindly neighbor Bobi Thornhill found ten Monarch caterpillars eating the last leaves of her four milkweed plants, and asked if I had milkweed to which she could transfer them. She brought five and deposited them on two plants near our terrace. Her research said they were of a size—25-45mm long—to begin pupating (https://monarchlab.org/biology-and-research/biology-and-natural-history/breeding-life-cycle/life-cycle/#larva).

I photographed them; then, before leaving for errands in Charlottesville, checked back: Three quietly nibbling, one moving along the ground under the milkweed, one missing—and a shifty-looking Chinese (aka “praying”) mantis prowling among the leaves. Suspicious, I chased the mantid off the plant and it sprinted to the other side of the terrace. (Had I realized, definitely, that some mantids will eat Monarch butterflies in all their life stages, I would have captured and moved it to the vegetable beds.) 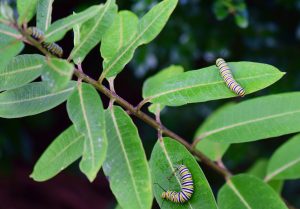 Late in the afternoon when I returned, only one caterpillar remained on the milkweed, and next morning it was still there, chomping away. The others? Pupating somewhere out of sight? Or eaten?

Curious, I went online to learn more about Monarch predators. Most birds avoid them, but ants, spiders and certain wasps will feast on eggs and larvae: (https://monarchlab.org/biology-and-research/biology-and-natural-history/parasites-natural-enemies/) And, I found that mantids are able to avoid the most toxic parts while eating  the caterpillars: (http://phenomena.nationalgeographic.com/2013/01/25/chinese-mantis-guts-its-toxic-caterpillar-prey/). 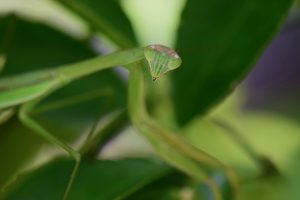 To give the remaining caterpillar a better chance, I wrapped the plant and adjacent rose support with the close-woven plastic shade cloth I keep for sheltering lettuce seedlings in late summer—making the metamorphosis, if not unassailable, at least inconvenient. 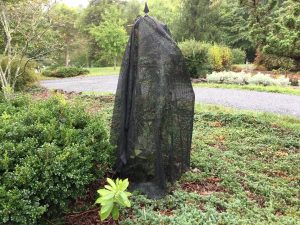 Next morning, we had a J-shaped caterpillar hanging from the top of the tuteur and, by late afternoon, a shiny green pupa in its place. Having learned that this generation of monarchs—the summer’s fourth—is the one that will fly to warmth for the winter, hibernate, and return in spring to restart the cycle, I was excited at the prospect of seeing this one off. 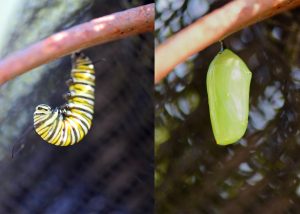 Next morning, thinking the heavy shade a bit unnatural, I partly opened the covering.

Another friend, Master Gardener Pat Chadwick, said she had 45 monarch caterpillars disappear from her swamp milkweeds in a matter of hours last week.

Now I understand why Monarchs lay so many eggs, and why some enthusiasts cut milkweed and move them inside to pupate. For now, we’re hopeful and on the alert for any Monarchs that made it.

Thanks to Bobi Thornhill for, if not butterflies, certainly a learning opportunity. 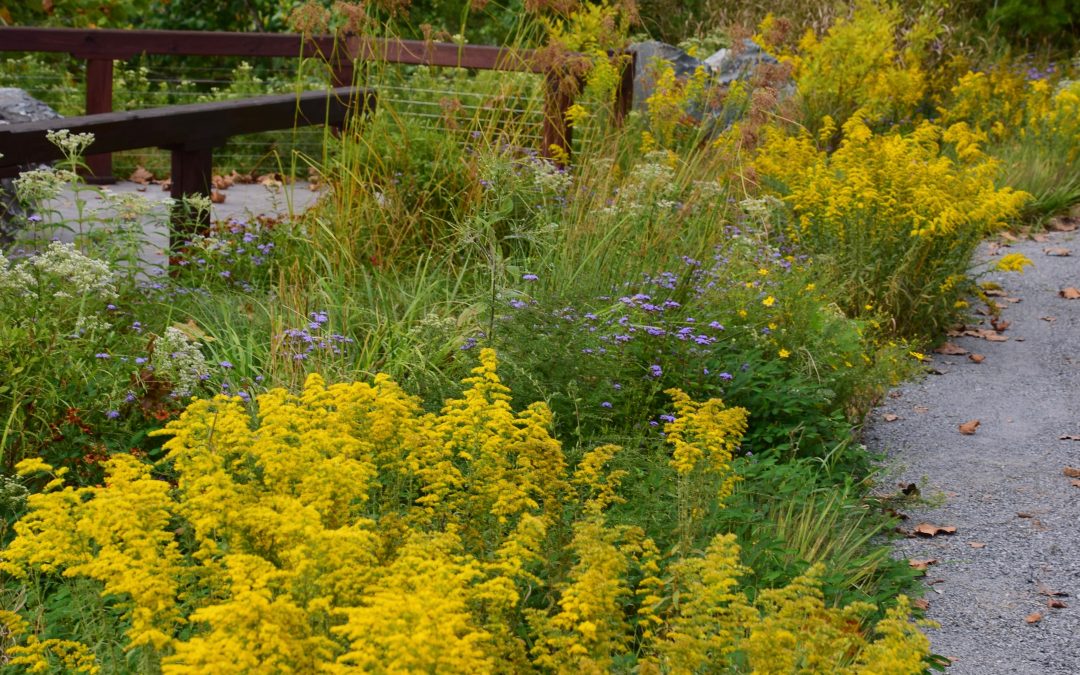 Many ways to glow

The Quarry Gardens are glowing right now with 14 species of goldenrod in various stages of bloom. If that seems like a lot, know that solidago, or goldenrod, is a genus of 100–120 species of flowering perennial plants in the aster family (Asteraceae), and most may be found in North America.

The most prominent species at the overlook platform is Gray goldenrod, Solidago nemoralis, seen above and in the highlight photo.

Nine species are QG legacies—found here in the pre-garden surveys of biota. Among those legacies is Pineywoods or Small’s goldenrod, Solidago pinetorum, pictured below, about 3 feet tall, discovered only weeks ago as a volunteer along the walk from the Visitor Center through the pine woods—a Nelson County first. 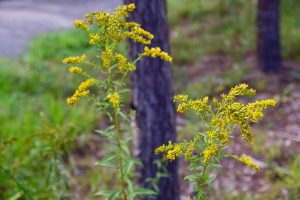 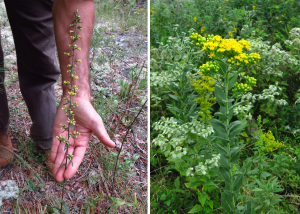 The Slender goldenrod at left is definitely a legacy but the Stiff goldenrod at right, found in the overlook prairie, might have sneaked in with purchased seeds of other plants.

​New to the site are five more species—native to the immediate area—that Rachel and her CUH crew have added:

They are often difficult to distinguish from one another

​G​oldenrods are among the most important late-season pollinator plan​t. Honeybees collect ​the nectar for winter, and other bees use the pollen to supply late-season nests.

​No honeybees in this ​photo, but at least a dozen species of bees and wasps were working the plants when it was taken. 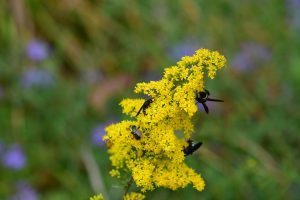 Here are some things from Wikipedia of interest about goldenrod: