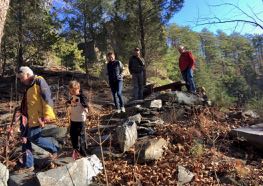 Our last visitors of the season for weekend tours have come and gone. This magnificent fall has faded at last and, as of Thanksgiving weekend, we are closed to all except Friends of the Quarry Gardens, who may visit independently.

It was a busy first year. Since April, some 1,200 visitors have walked the trails with us. Articles in Virginia Living, Virginia Gardener, Abode, the Daily Progress, Nelson County Times Farmville Herald, Rural Virginian, other local newspapers—and an oft-repeated segment of Virginia Home Grown and Virginia Currents on PBS—brought visitors from throughout the state.

We were delighted to host chapters of the Virginia Native Plant Society, Virginia Master Naturalists and Master Gardeners, Sierra Club, Monticello history clubs, the James River Association, and many garden clubs. In the coming year, we look forward to hosting more training sessions and classes.

Planting continued well after the April opening. The demonstration garden around the Visitor Center was only started in March; now, it lacks only a few difficult-to-source species, as do a few of the other 32 galleries.

We won’t be idle over the winter. On mild days, Japanese honeysuckle, Chinese lespedeza, autumn olive, and miscanthus will be the targets of our efforts to eradicate exotic invasive species. Hunters are helping us reduce the number of deer enjoying the trailside buffet

The bare walls inside the Visitor Center call out to us. Planned are exhibits on the geology under the gardens, and its expression in species in and above the soil. The south side of the building will feature the history of soapstone quarrying and manufacturing here. By spring, we expect the Nelson and Albemarle Railroad will be in operation, its engine running through dioramas between Rockfish Junction and Esmont.

We’ll open again by appointment in March for naturalists who want to see spring’s earliest phenomena, and begin weekend tours again in April. For now, the gardens sleep. 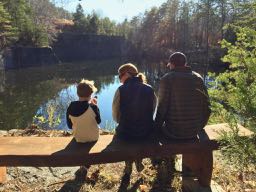 The Eric Bull family of Fluvanna County—including young Henry’s grandparents from New York—joined us for a walk on Thanksgiving Friday afternoon. Eric made the 11 massive benches placed around the quarry site from trees matching species found here. 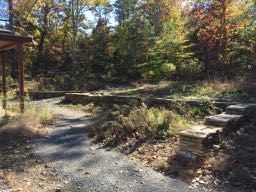 The demonstration garden at rest.