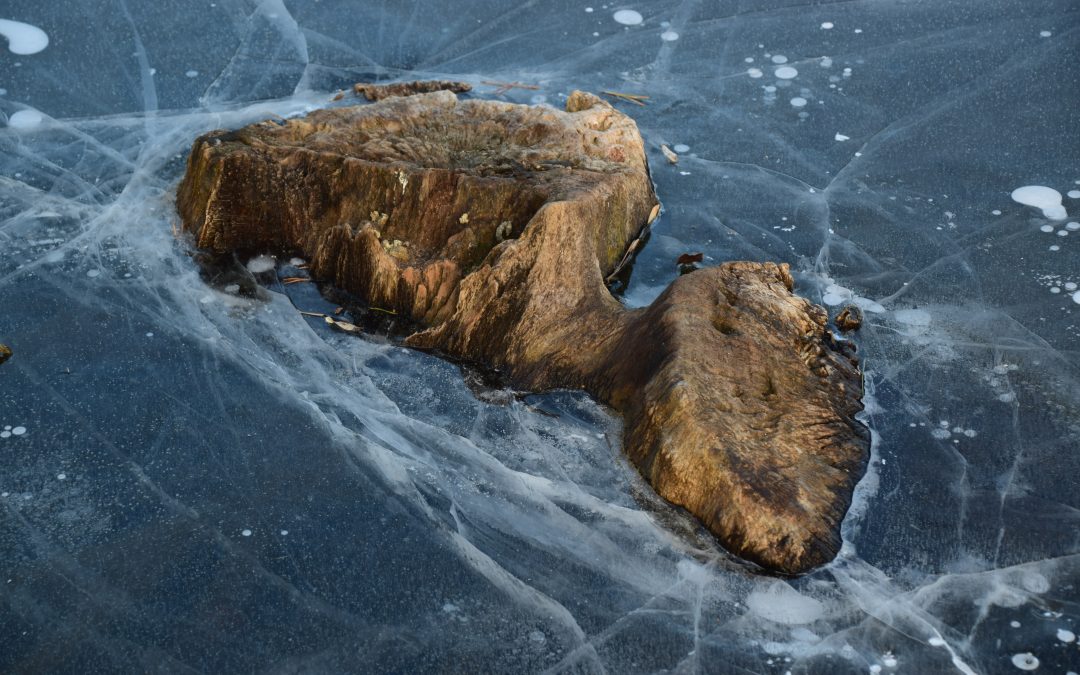 The quarry pools, some 40-feet deep, have not frozen for many years, but this year they did freeze in early January’s record-breaking chill. Unfortunately, because of the depth of the quarries, the frozen top adds little of interest, especially because, for whatever reason, it is not very smooth. On the other hand, the lake on our adjoining property, which is fed in part by Bern’s Run stream that runs alongside the quarries, did freeze to a depth of four to six inches for the first time in 25 years. Enough to walk on (or even drive over with an ATV). And so we did (the walking part). It was magical. Art everywhere.
The featured photo is of a cedar stump in a shallow spot. Though the image appears to show rough ice stacked around the edges of some uninhabited coastal island, it’s just an old stump, and the entire surface is smooth. Looking straight down through clear ice beside it, we could see the tree’s roots, splayed around it and extending for many yards. But then, anywhere we looked was wondrous. 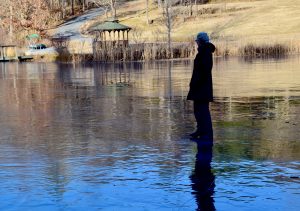 With temperatures in the low 20s, even a bright sun produced no liquid. 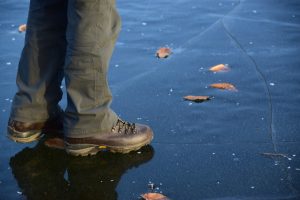 Good boots kept us upright on the glassy surface. 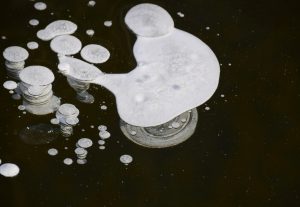 Under the surface glaze, we found layers of—what?—frozen bubbles?—occurring​ in areas where
we believe are underwater springs. Below the ice in the shallows, we spied small fish swimming. 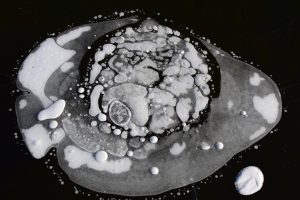 Trompe l’oeil—twice: This is not a black-and-white photo. Nor is it a rough
place in the ice. Belying all that texture, the surface is  mirror smooth. 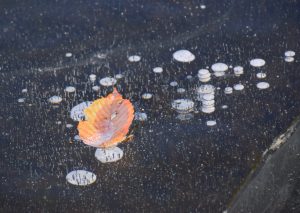 Here, too, although the leaf appears to be sitting on top of the ice, it is embedded
under a smooth surface in what appear to be carbonated bubbles. 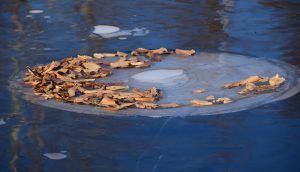 There were odd exceptions to the smoothness. Caught in depressed circles near
the lake’s north end were these Beech leaves, some sticking up into the air.
It was not a quiet walk on the water. The ice made eery, echoing booms as lengthy cracks developed, lacing the surface (which mostly remained smooth). That, numb fingers, and waning light finally drove us—with our treasured photos and memories—back to shore.